Bringing broad leadership experience and earnest management skills, Manuel Aguirre has gone from owning his own construction company to serving as Managing Director of CH2M’s Latin America region since 2009, holding a broad range of positions within CH2M and other engineering firms along the way. He was honored to be a board member of CH2M from 2010 to 2012. With a background in structural and civil engineering, combined with a graduate degree in business administration, Manuel always brings a unique perspective to his teammates and clients, offering both technical and business solutions to a project. He has served as a member of the Board of Directors of the American Chamber of Commerce in Argentina for 10 years, and is founder and member of the ARGECON Chamber. Manuel is a registered civil and structural engineer with a master’s degree in business administration from the Polytechnic University of Madrid. He has participated in several post-graduate programs, including at Harvard University and Instituto de Altos Estudios in Argentina. Under Secretary for Innovation and Partnerships, State of São Paulo, Brazil

Karla Bertocco is Under Secretary for Innovation and Partnerships for the State of São Paulo, Brazil. Previously, she was General Director of ARTESP – the Transportation Regulatory Agency of São Paulo. Prior to working at ARTESP, she was an Advisor to the President of the public waste and sanitation company SABESP, and State Coordinator for the Department of Sanitation and Energy of the State of São Paulo. Between 2008 and 2010 she was Director of Institutional Relations for ARSESP, the Regulatory Agency for Sanitation and Energy of the State of São Paulo. Karla received a bachelor’s degree in Public Administration from the Fundação Getulio Vargas and a bachelor’s in law from the Pontificia Universidade Catolica de São Paulo, with post-graduate work in Administrative Law and Regulation from the School of Law of Fundação Getulio Vargas. Pilita Clark was appointed Environment Correspondent in May 2011, having previously been the Aerospace Correspondent and Deputy News Editor on the main news desk at the Financial Times, and then Deputy Editor of the FT Magazine. In her current role, Ms. Clark covers all environmental issues, from climate change to wildlife and renewable energy, but has a particular focus on the impact of low carbon policies on businesses and investors. Before joining the FT in 2003 as a Commissioning Editor on the FT Magazine, Ms. Clark was a Senior Writer for the Sydney Morning Herald, where she was a Political Reporter in Washington DC and Canberra. She was also Managing Editor of The Eye news magazine in Sydney, and a Nieman Fellow at Harvard University. Manuel Olivera has served since 2012 as the Regional Director at C40 Latin American Cities Climate Change Leadership Group, after having served five years as the City Director in Bogota. In this position Manuel has supported several projects aimed at reducing greenhouse emissions including methane capture at landfills; traffic light LED retrofitting; diesel fuel quality improvement; and the implementation of the Hybrid Electric Bus Test Programme in Latin America. As Regional Director he supports 11 large cities in their priorities on climate change. Manuel has more than 30 years of professional experience at both national and international levels leading multidisciplinary groups, assessing high level decision making, and ensuring programmatic success across several environmental fields. Manuel has worked as a consultant for the Inte-American Development Bank, the World Bank, United Nations Development Project, World Wildlife Foundation, private companies, as well as Latin American governments. Manuel has a Master’s degree in Resource Assessment for Development Planning from the University of East Anglia in Norwich, and pursued doctoral studies in Development Socioeconomics at the School for Advanced Studies in the Social Sciences in Paris. 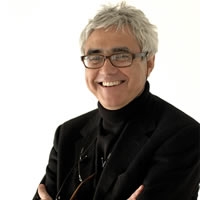 Born in Uruguay, Rafael Viñoly has lived in New York since 1978 from where he oversees an international practice that has developed more than 400 designs for projects in the United States, Latin America, Europe, Middle East, and Asia. Viñoly’s work is marked by a sustained structural originality that transcends the passing fads of architectural movements, and he is consistently driven by the belief that the essential responsibility of architecture is to generate the most elegant solution within the economy of each project. Among his most notable and critically acclaimed buildings are the Tokyo International Forum; the Kimmel Center for the Performing Arts in Philadelphia; the Howard Hughes Medical Institute – Janelia Farm Campus in Ashburn, Virginia; Carrasco International Airport, in Montevideo, Uruguay; New York University Abu Dhabi Campus; 20 Fenchurch Street in London; and 432 Park Avenue in New York. He is a member of the American Institute of Architects, the National Academy, the Royal Institute of British Architects, the Japan Institute of Architects, and the Sociedad Central de Arquitectos in Argentina. Mrs. Williamson is responsible for managing and maintaining Jamaica’s Port Authority diverse commercial investments, including the Port Authority Free Zones, the Kingston & Montego Bay Free Zones and the Jamaica International Free Zone. Her professional experience includes working as Senior Accountant at KPMG Peat Marwick and as Manager of Finance & Accounts at the National Export-Import Bank of Jamaica Limited. She joined the Port Authority in 1995 as Vice President of Finance & Accounting where she served in that capacity until April 2006, when she was appointed Senior Vice President for Finance & Information Services. She is a member of the Institute of Chartered Accountants of Jamaica and also serves on the Boards of Jamaica International Free Zone Ltd; Ports Management & Security Ltd; Boundbrook Wharves Development Ltd and Port Authority Management Services Ltd. Williamson obtained a Master of Science in Accounting and a Bachelor of Science in Management Studies from the University of the West Indies in 1979 and 1978, respectively. She was designated FCA from the Institute of Chartered Accountants of Jamaica (ICAJ) in 1993. In 2003 she successfully pursued an Executive MBA from Florida International University.

Selection of 12 Finalists by the Harvard Zofnass Program: July 2015