Unintended Consequences: COVID-19 and the Acceleration of Digital Transformation in Infrastructure Engineering, Construction, and Operations

Led by Chris Barron from Bentley Systems and SIAB.

Keith Clarke, former CEO of Atkins and Chairman of Forum for the Future 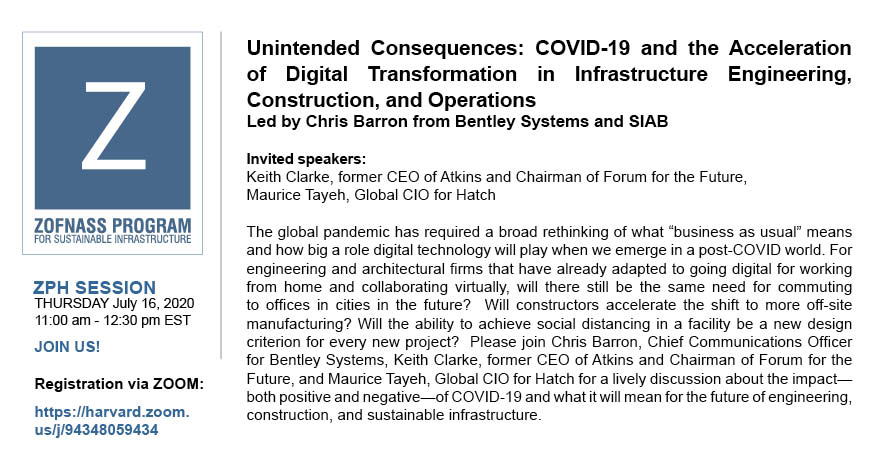 Chris joined Bentley as vice president of corporate marketing in 2008 and was appointed to chief communications officer in 2016. A registered architect, Chris left architectural practice in 1983 to pursue a career in the marketing of computer-aided-design software to the AEC industry. Prior to joining Bentley, he served as marketing director for the AEC Market Group at Autodesk, corporate marketing manager of Softdesk, and senior marketing manager at Intergraph. He currently serves on the Advisory Board of the Zofnass Program for Sustainable Infrastructure at Harvard University’s Graduate School of Design. Chris holds a bachelor’s degree in biology and geography from Middlebury College and a master’s degree in architecture from Harvard University.

With more than forty years’ experience, Keith has worked in all sectors of the UK and international construction industry and retired from WS Atkins in 2011 after leading the business to considerable growth.

His current roles include Chair of Forum for the Future, Constructionarium and the Active Building Centre in Swansea. He is also a Member of the Advisory Board, Environmental Change Institute, Oxford and a Director of Women In Property.

Keith’s focus is on the transition to a net zero carbon economy for the built environment and he is an international speaker on this subject.

Mr. Tayeh’ s career span over 30 years of international business covering several industries: Oil & Gas; Manufacturing; and Aerospace. Recognized in the industry as a leader with the ability to analyze, simplify and transform businesses through technology.

Experience in Digital and business transformation at key market leaders. Recognized in the Oil & Gas / Engineering & Construction (EPC) industry as a leader with the ability to analyze, simplify and transform businesses through digital and information technology.

For the past 20 years, Maurice have served as CIO for major international and Fortune 500 companies leading the charge of key decisions on innovation and new technology solutions. Maurice has led worldwide IT organizations of several hundred people with annual budgets of several hundred million Dollars.

In his current role at Hatch, Maurice lead the IT and Digital teams in major internal digital transformation initiatives. Among Maurice’s main responsibilities is the development and deployment of a major digital strategic initiative called “Digital Project Delivery”.

Prior to Hatch, Maurice held several positions in the Engineering & Construction Industry including the Global CIO at McDermott as well as the Group CIO at Technip (TechnipFMC now).

Maurice began his career in the Aerospace industry where he held several positions at Loral Space & Communications; and Lockheed Martin. Maurice’s work in the Aerospace and Manufacturing industries was focused on Artificial Intelligence & Robotics.

Maurice is a regular speaker at global technology conferences. As a true global leader, Maurice is fluent in English, French and Arabic. He has lived and worked in various cities around the world including N. America, Europe, Middle East and Africa.