This is part of a series exploring public space and democracy in Mexico City.

In this series we plan to explore the role of experts, authorities, and lay people in planning, creating, and inhabiting urban public spaces, through accounts of the Roma neighborhood of Mexico City, where we live and work.

Ricardo Nurko is founder and principal of the architectural firm Despacho 22 and teaches in the School of Architecture of the National Autonomous University of Mexico (UNAM). He is also a member of the Taller Participativo Barrial (Participatory Neighborhood Workshop), a horizontal urban planning collective.

Analiese Richard is Associate Professor of Anthropology at the University of the Pacific and Visiting Researcher in the Center for Research on North America (CISAN) at the UNAM. Her research focuses on issues of environmental citizenship, democracy, and expertise, and is supported by a Fulbright Garcia-Robles fellowship.

La Roma was one of the first modern planned neighborhoods to be located outside Mexico City’s downtown core, in the early 20th century. It was built over a drained lakebed, and suffered extensive damage during the 1985 earthquake. Over the last decade it has experienced rapid gentrification and densification, leading to social, economic, and political tension. 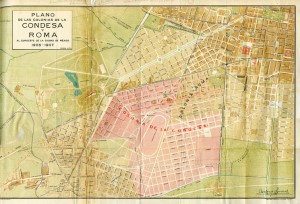 Original plan of Roma and Condesa developments (reproduced at www.arquine.com)

In 2014, a group of architects and urban planners who live and work in La Roma founded the Participatory Neighborhood Workshop (TPB) to facilitate civic engagement in urban planning processes. As we’ll discuss in future posts, few official mechanisms exist for citizens to participate in decision-making regarding the use and management of public space in Mexico City, and almost none are viewed as legitimate or unbiased. Looking around at the assemblage of neglected public spaces and the multiple conflicts over space in their neighborhood, the members of TPB decided to try new methods to combine expert and lay knowledge in participatory planning processes. So far, TPB has conducted participatory studies of several parks in La Roma, facilitated dialogue between planning authorities and neighborhood residents, and engaged in citizen action on a major urban megaproject. In future posts, we´ll tell the story of these experiences and share some of the resulting insights about the dynamics of public space in the megalopolis.

In many ways, La Roma is paradigmatic of the challenges facing urban neighborhoods the world over. It is tempting to apply normative or universalist models, so why the particular focus on participatory methodology carried out at the neighborhood scale? A primary reason that TPB has chosen this route stems from the complex nature of contemporary urban spaces. Densification (whether brought about through targeted public policies or through individual strategies to reduce commute times and enhance quality of life) doesn´t just concentrate populations within a reduced territory. Existing public spaces become both multi-functional and contested. Such spaces inevitably incorporate multiple historical and social layers, each of which is associated with powerful economic and political interests. It is important to understand the functions of particular spaces and the actors and interests involved in a practical sense. Without this street-level understanding, planned interventions may suffer from design deficiencies and/ or provoke deep and ongoing conflicts. 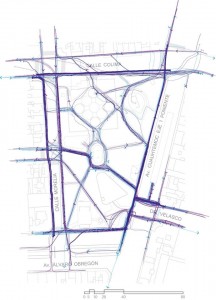 It is important for planners and authorities to listen to the perspectives of neighborhood residents and other users, but not merely as a means of preventing friction. Differently situated groups of users generate different kinds of practical and historical knowledge, which can be integrated with that of experts and authorities to construct a more complete understanding of the way specific public spaces function in context. While there are many iconic public spaces claimed by the city or nation as a whole (the Zócalo or Chapultepec Park, for example), focusing on the neighborhood scale enables insights and interventions of a different sort. Both the neighborhood residents and commuters who use Pushkin Park in La Roma (one of our study sites) identify with the space as conforming part of their daily routines. Quotidian encounters give rise to a variety of modes of spatial appropriation, and contribute to the generation of place-based identities. The specific sense of place that is built up over time then forms a backdrop for the interplay of political and economic interests seeking to transform it.

In a fundamental sense, urban planning has been overrun and outstripped at multiple scales—neighborhood, urbe, and megalopolis. Urban social groups have, of their own accord, alternately appropriated and abandoned public spaces to suit their own needs. Unilateral or vertical attempts by authorities to “rescue” or restructure these spaces are thus no longer neither adequate nor appropriate. The work of TPB is based on the conviction that urban spaces—especially public spaces—should be configured to accommodate the everyday actors who use them. What can be done to redirect existing bureaucratic structures toward this goal? Our next post tells how TPB created relationships with planning authorities and neighborhood groups to facilitate the participatory redesign of Pushkin Park.