In order to understand how local government actors operate with regard to public space in Mexico City, you need to be acquainted with the overlapping administrative layers and temporality of bureaucratic processes. As it turns out, the management of public space has a lot to do with “political time.”

In the first place, it’s important to point out that our grand megalopolis is composed of several different federal entities ruled by legislatures with a certain degree of independence:

The Metropolitan Zone of the Valley of Mexico (ZMVM, by its Spanish acronym) is an urban expanse encompassing parts of the states of Hidalgo, Puebla, the state of Mexico, and the Federal District (also known as Mexico City, see below). Although the city itself has existed since 1325, the Federal District was created as a governmental entity in 1824 by Mexico’s first constitution. It was designated as the seat of all three branches of federal government (legislative, judicial, and executive), and governed directly by the executive branch in order to avert undue influence from a state government (in other words, a loose copy of Washington, D.C.). Beginning in the 1980’s, however, this model has undergone successive reforms. In 1997 a legislature was created with representatives directly elected by popular vote and its own internal rules, known as the Representative Assembly (Asamblea de Representantes). On January 26 of this year, the city began a new process of promulgating its own constitution, and its name was officially changed from Mexico, D.F. to la Ciudad de Mexico (or CDMX, the acronym chosen by the Mancera administration for its new “re-branding” campaign). The new logo/acronym on display in the Zócalo. Photo credit: laotraopinion.com.mx

The outcome of that process will presumably grant the city a charter parallel to that of a state within the Mexican federation, enabling it to leave behind its historic dependency on the executive power of the federal government. The other municipalities that make up the ZMVM are governed directly by their own jurisprudence. Mexico City (formerly DF, now CDMX) is currently governed by a Chief of Government (Jefe de Gobierno), elected every 6 years by popular vote (same election schedule as the President of the Republic). The city is divided territorially into 16 boroughs (delegaciones), each headed by a Delegate elected every 3 years. The Representative Assembly (described above) has 66 members, also elected triennially.

The government is divided into departments (dependencias), the majority referred to as Secretariats. Among them are the Secretariat of Urban Development and Housing (SEDUVI), charged with designing and coordinating urban policies in Mexico City including the recuperation of public space and the reactivation of underused and underserved zones. The Authority of Public Space (AEP), a decentralized entity of SEDUVI, is in charge of strategic planning, design, and development of public space within Mexico City.

The primary responsibility of the boroughs is the administration of their territory, not the implementation of new projects. These fall under the executive authority of the Chief of Government, and are delegated to SEDUVI. But the line between routine administration and activation of public space is subtle. For example, improving and illuminating a sidewalk by creating new pedestrian walkways with integrated lighting can create conflict between the authority of the central Mexico City government departments and that of the Delegate over his or her territory. In some cases, this has led to duplication of efforts or neglect of public spaces due to confusion over whose responsibility it is to maintain them.

All of these overlapping and sometimes competing layers of urban governance are further complicated by bureaucratic and political timing. Budgets are assigned annually with the iron-clad stipulation that the funds must be spent within the same administrative year. If not, the corresponding entity loses the funds and the amount is deducted from the following year’s budget. Thus functionaries’ scope of action is limited by the budget process. Projects must be developed on a very short time frame and executed before the end of the current administrative calendar.

Since our grand megalopolis has no integrated development plan, one-off urban interventions are common. These are usually major infrastructure projects aimed at resolving problems that affect large portions of the population or projects with local impact. In both kinds of projects, priority is given to private and political interests. Functionaries are looking to move up in the governmental pyramid and occupy a higher post during the next administrative period, and so they try to cultivate political capital by inaugurating public works that were promised during the last campaigns or touted by the administration. The political and administrative calendars thus place important limits on decision making about urban development. Citizen participation is marginalized both due to the extended time periods needed to construct consensus as well as the dangers they represent for functionaries, in that the outcomes of participatory processes may force functionaries to change the direction of their pet projects or conflict with agendas imposed from above by the executive branch.

Our society is diverse, and every day more of us are concentrated in ever-smaller spaces. Thus forging consensus about major decisions is a complicated process that can take time. For functionaries, it is often easier and more politically practical to “socialize” a pre-planned, vertically designed project than to commit to open citizen participation in decision-making. However, such projects tend to fail in the long term. By failing to listen to users’ priorities and to include users in conceptualization and decision-making, the projects create public spaces that alienate and exclude the public. This leads to underutilization of very valuable space, and significant resource waste. 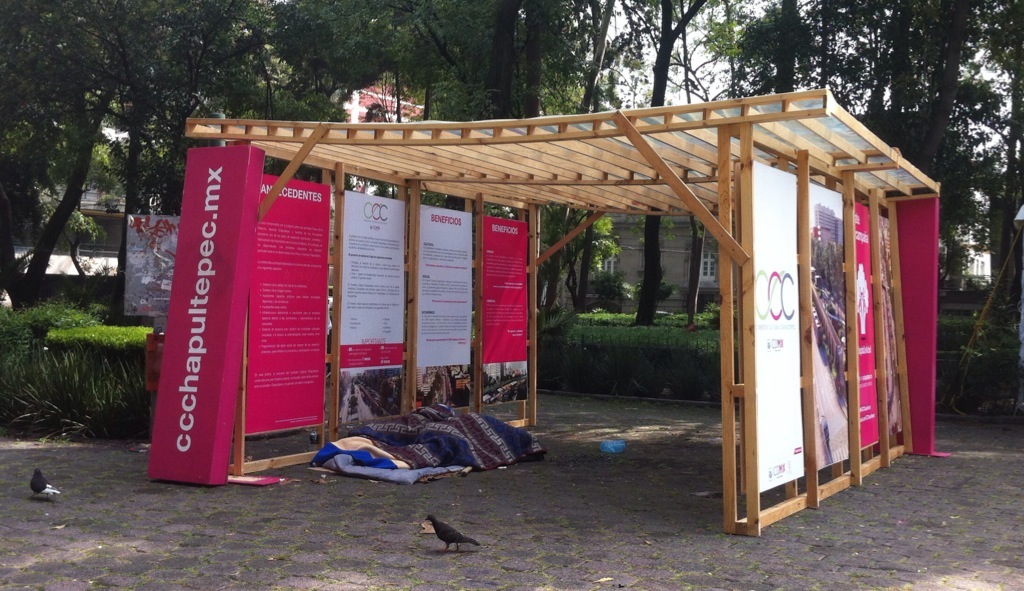 These installations were set up throughout the central neighborhoods of Mexico City in Fall 2015 as part of a massive effort to “socialize” a major urban development project called the Corredor Cultural Chapultepec. The project, proposed through an opaque public-private partnership and announced with no prior public consultation, was broadly opposed by neighborhood, civic, and professional groups. In future posts, we’ll explain how this botched planning process ultimately lead to the project’s historic defeat (and the disgrace of its promoters).

We need to improve and adapt our public spaces to make them more accessible and inclusive. That is, we need to prioritize the primary mission of public space as a place of encounter and convivencia where people from different social backgrounds cross paths and get to know one another. Virtual social networks have been useful platforms for linking the efforts of diverse groups interested in defending and improving public space. They have been especially useful in denouncing abuses of authority and spreading information. However, the exhausting nature of daily life in the megalopolis can lead to apathy, which is compounded by the lack of transparency and accountability in governmental entities and among the political class in general. It can be difficult to generate broad-based citizen participation when the results of such efforts are unclear or inconclusive.

In 2011, the government of DF implemented Neighborhood Committees (Comites Vecinales). These elected volunteers work in their neighborhoods to disseminate information and foment citizen participation, supporting the work of government agencies by arranging local-level decision-making processes. In the same year, the Participatory Budget program (Presupuesto Participativo) was also implemented, which enables residents to identify problems and opportunities in their neighborhoods and propose projects to address them. These two new programs work hand in hand to cover the gaps in basic service by government authorities charged with maintaining and improving public space (sidewalks and pathways, lighting, green space, signage, etc.). However, the fact that routine maintenance needs largely go unattended by city government means that Participatory Budget projects can only very rarely stretch beyond fundamental safety issues to engage residents in re-imagining their public spaces. The results of the implementation of Neighborhood Committees are similarly ambiguous. In some neighborhoods the committees have done exemplary work, fomenting productive collaboration between citizens and authorities. In some, the committees have been co-opted by political parties and interests and deployed to “socialize” projects imposed from above. In many neighborhoods, they have simply failed to solidify due to citizen apathy. 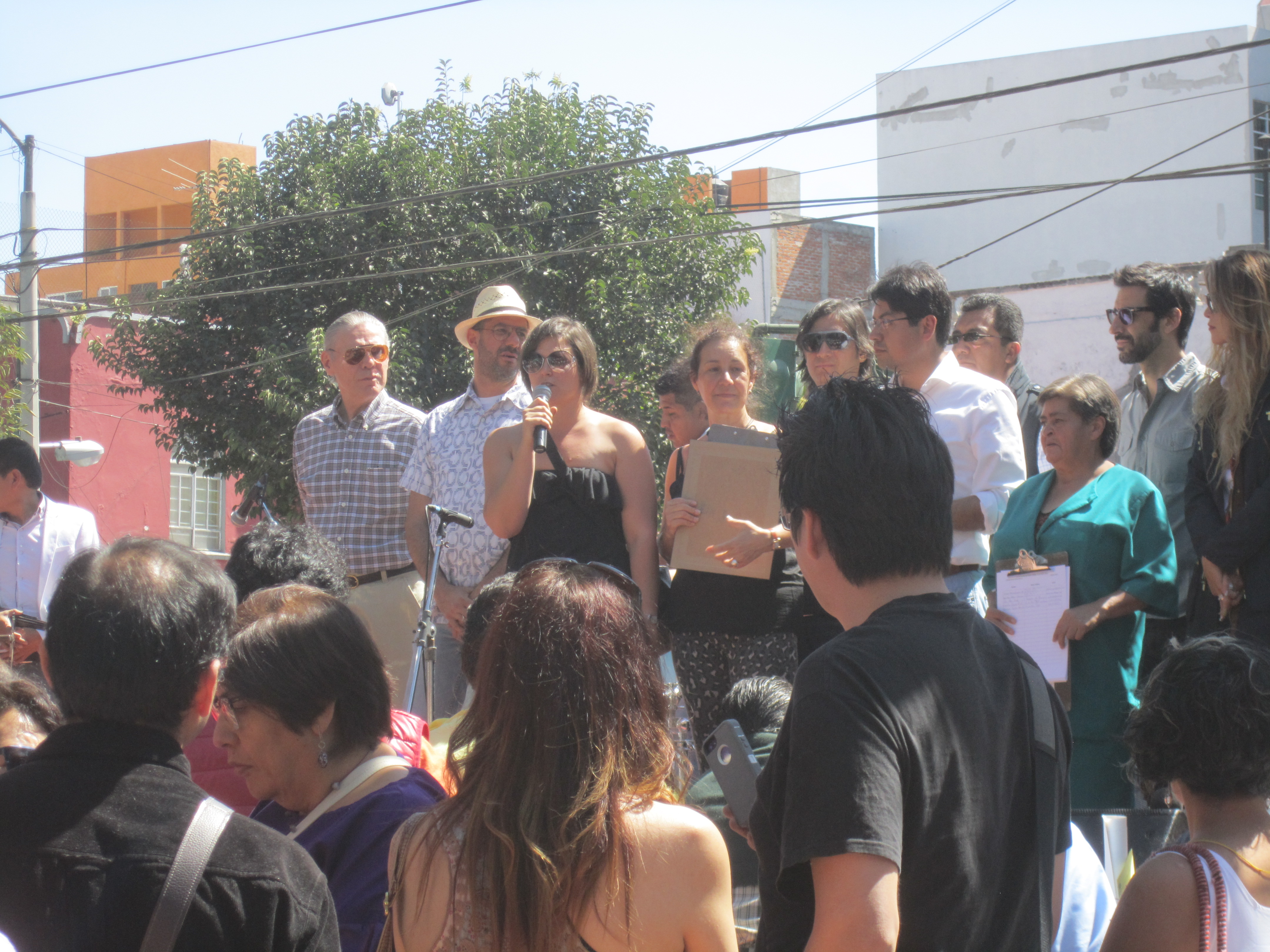 Members of the Neighborhood Committee of Roma Norte 2 in the inauguration of a rehabilitation project in Plaza Luis Cabrera, February 2014. The project was planned and organized by the Committee with funds from the Participatory Budget program as well as donations from neighbors and business owners. Aside from improvements to lighting, benches and walkways, the park’s central fountain was restored to its former glory.

The time required to foment community participation and make collective decisions about public space, which should be for everyone, is precluded by administrative calendars and “political time.” Instead, functionaries plan and implement projects behind the public’s back. Truly participatory decision-making processes are substituted by “socialization” campaigns aimed at garnering public support for pre-planned and hastily implemented projects.

Henri Lefebvre’s analysis of spatial trilogies (Space conçu (conceived space)/ Space perçu (perceived space)/ Space veçu (lived space) forms the core of his theory of the social production of space. Conceived space designates the space where projects are elaborated and power is exercised, the domain in which decisions are made about the future form of our cities; perceived spaces are the concrete ones, the buildings and the streets; the lived space is the space of everyday experience, the social space. Participation must be involved in the space of power, the conceived space, not only in the lived space. From the diagnosis of needs and desires to the planning and implementation of projects, specialists and citizens must work together. Since our entire societies are the future users of public spaces, we all have the right and obligation to get involved in their transformation. A first step toward realizing this goal in Mexico City is to identify structural obstacles like “political time” and find creative ways to confront them or work around them.