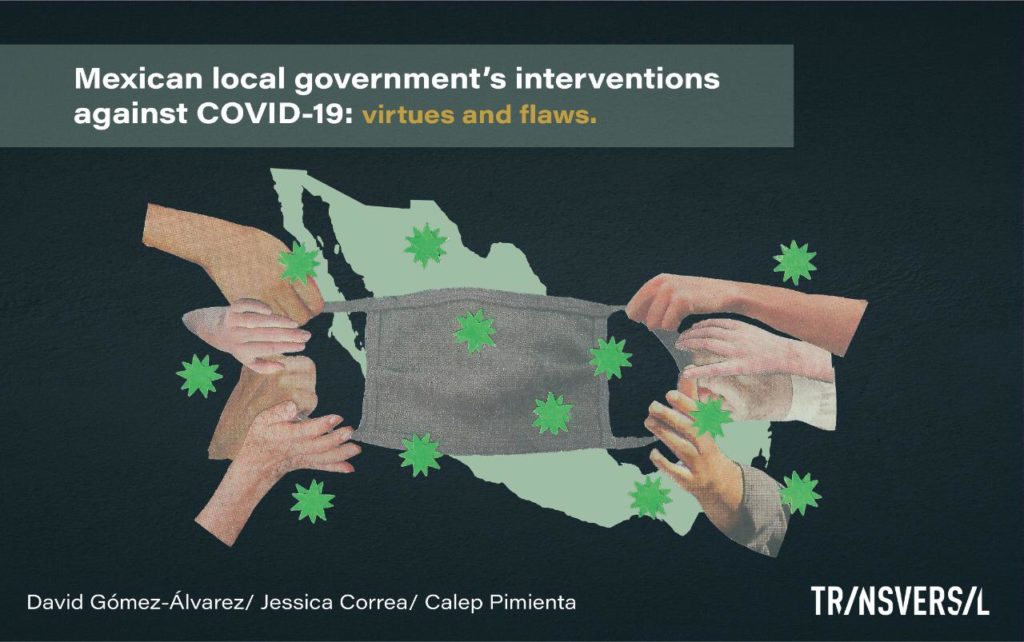 David Gómez-Álvarez is a research professor at the Universidad de Guadalajara and Executive Director of Transversal Think Tank. Jessica Correa and Calep Pimienta are researchers at Transversal Think Tank. Calep is also a member of the “Federalismo en COVID” initiative, an interactive platform that analyzes social and economic policy instruments in the context of COVID-19.

The COVID-19 health crisis creates opportunities to analyze state government activity in Mexico. The social and economic impact faced by each of the country’s state governments demonstrates their responses to the cultural, social, and economic particularities of each locality, but also to their institutional capacities to respond to these growing demands. In this sense, the Mexican case has detonated the unrest of the past, making visible the complications that have historically existed in shaping the federalist puzzle, which should be autonomous and able to exercise its capacities to meet the demands of the moment. The federal government’s lackluster response to the socio-economic needs of the situation has required local governments to intervene despite their narrow fiscal possibilities and their great dependence on the federal order.

In Mexico, during the first semester of the year, the pandemic caused the worst fall in GDP in Mexico’s history (-18.7%). During this time more than one million formal jobs were lost and up to 11 million more people in the country are estimated to have fallen into poverty, putting them at risk of hunger. In addition, rates of gender-based and domestic violence increased alarmingly: domestic violence emergency calls are estimated to have increased by 53% compared to the first quarter of 2019.

The Federalismo en COVID project, co-promoted by CIDE, Transversal, Laboratorio Nacional de Políticas Públicas and Apted, exhibits the effort that local governments made to address the social effects of the pandemic. From March 11th to July 31st 2020, the country’s 32 state governments announced a cumulative 629 policy instruments, each differentiated by indicators like transparency, coverage, scope and relevance.

The average response from local governments is 20 instruments per state. In absolute terms, Zacatecas’ response relative to other state governments’ has been remarkable. Zacatecas announced 50 instruments in a short period of time (of which 40 are completely new) mostly focused on social assistance for marginalized populations.

Tabasco’s weak response to the impact of the pandemic contrasts Zacatecas’ approach. The government of this southern state announced only five instruments in the period of time studied, of which only three were new measures. A simple comparison like this reflects the disparity in state governments’ efforts to respond to crises, which can be attributable to a variety of reasons such as leadership, budget, human and/or technical resources. Nonetheless, the number of measures per state is still an indicator of approximation to reality. In this regard, we present an analysis of state instruments based on our analysis of the nature and type of the instruments, the source of their financing, and the quality of the interventions.

Generally speaking, the commitment of the 32 state governments to generate these instruments has been directed, mostly, to Mexico’s companies (small, medium or large) and secondly to the growing population in conditions of poverty and social vulnerability. To a lesser extent, state governments announced support for the economically active population within the informal and formal market. Only 19 and 16 local governments, respectively, created at least one instrument for these markets, which is surprising given the country’s growing market informalities.

While the measures announced by these governments may seem like a great achievement due to the short time in which they were formulated and implemented, their quality (in terms of the information presented in their attributes) and their budgetary transparency represents one of the greatest risks and challenges to ensure accountability (both vertical and horizontal), to avoid client practices, and to reduce possible cases of corruption. In a large majority of instruments (89%), it has been impossible to identify an allocated budget. Moreover, only four states have a budget allocation rate of more than 50% for their policy instruments. The examples of the governments of Puebla and Querétaro represent the most serious cases in terms of visibility of the allocated budget. In addition, for the 147 and 111 instruments of economic and food support, respectively, entities have lacked clarity on the frequency, duration, and the amount of support. On the other hand, the context has elucidated the discussion about the narrow fiscal autonomy of states and their dependence on federal order. While the nation’s response has left much to be desired, especially in terms of the amounts allocated to address social problems and their targets, an opportunity (although limited) has been opened for states to build their political authority based on their interests and capabilities. In this regard, the crisis has mobilized states to financing their work with non-federal resources, enabling coordination in the design, financing, and implementing of measures from own or multisectoral resources. Thus, several governments have managed to announce shared budgets with private banks, national companies, or even civil society donations. A number of examples of these measures can be seen in states such as Sinaloa and Querétaro. The governments of Michoacán, Chihuahua, Yucatán, Jalisco, and Tlaxcala, on the other hand, have shown their capabilities to re-manage their budgets or acquire debt. While this may represent a clear example of federalist autonomy, serious problems of dependence have emerged in light of national-level conflicts discussed at the National Governors’ Conference (CONAGO) and its retaliations to the federal government. Besides that, supervisory internal organs find themselves with a new challenge because of the complexity of auditing the programs and their shared allocated budget, reducing the odds of effective and legitimate uses of resources.

In sum, state governments have been a key answer in the implementation of social and economic instruments that address the externalities of the country’s national health measures. Some subnational governments have demonstrated a great capacity to design instruments that benefit various sectors, distinctively the corporate sector and socially marginalized residents. In addition, state intervention in this short period of time has left much to be desired in terms of the regulation and design of measures. The lack of information on state actions represents a latent risk of clientelism and corruption, as well as a setback in the governments’ transparency of actions and the possibilities of accountability for them. On the other hand, tensions between federal and state politics show a healthy example of differentiated interests in federal systems that, without finding a balance, could lead to the inefficient use of resources, the waste of measures offered, and even the delegitimation of certain institutions. The health crisis can set a new precedent for the reconfiguration of the Mexican tax pact, as well as states’ use of tax capacities and their knowhow to build local government policies, under new cross-sectoral collaboration schemes that contribute to the increase of institutional capacities to attend to local demands.